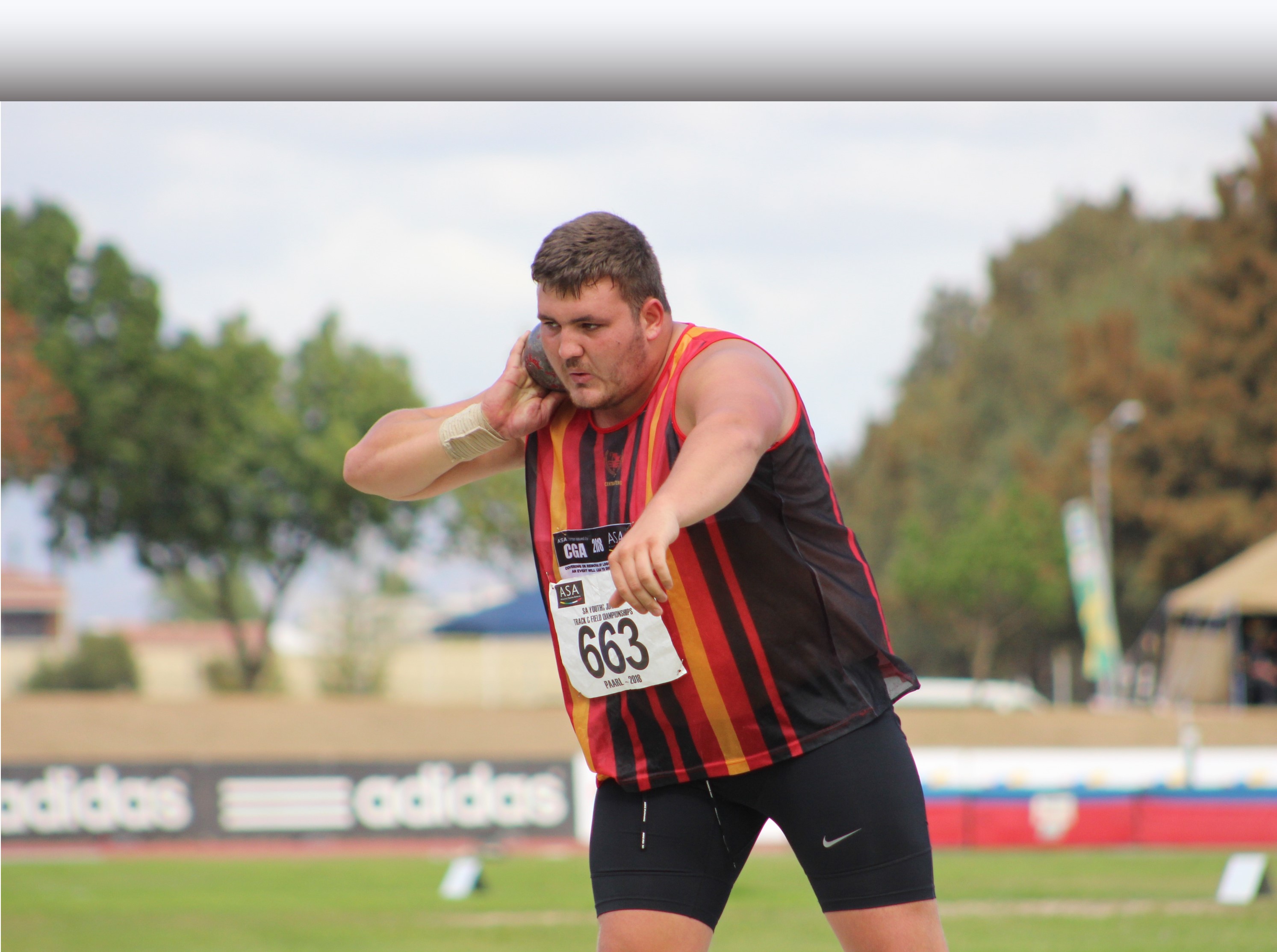 South African national shot put champion Kyle Blignaut is going for the national and African records at the first leg of the eagerly-awaited ASA Grand Prix Continental Tour at Mangaung Athletics Stadium in the Free State on Wednesday 16 March 2022 starting at 4pm.

Blignaut, who’s personal best is 21.21 metres achieved at UJ Stadium 15 May 2021, is also gunning for the continental record of 21.08 set by Chukwuebuka Enekwechi of Nigeria at the 2018 African Athletics Senior Championships in Asaba.

The City of Roses will be the perfect stage for another titanic clash between Blignaut and Jason Van Rooyen, who last competed against each other at the Tokyo Olympics last year. The pair were the only representatives in the shot put and the latter was the only one to progress to the final where he had a sixth-place finish. His dream now is to qualify for his second Olympic Games in Paris 2024.

“I’m already dream big about this year. I will open my season in Mangaung and I will take it one step at a time. Thereafter, I hope to compete in the other Grand Prix events including Germiston and Potchefstroom, before I go to the national senior championships (ASA U16, U18 Youth and U20 Junior T&F National Championships) in April.  On my Olympic Games debut in Tokyo, I threw 21m on the dot and I was happy with my performance,” said the 22-year-old Blignaut, who wants a flat 22m throw.

He made history by reaching the Olympic final, becoming the first South African since Janus Robberts at the Sydney Olympic Games, Australia in 2000.

But on Wednesday, his priority is to open his season in the City of Roses and qualify for this year’s World Championships in July (Oregon, USA) and the Commonwealth Games in August (Birmingham, UK).  This year, he also hopes to do a couple of the Diamond Leagues.

His objective is to become the first African to throw 22m flat in the senior ranks and break the long-standing SA shot put record of 21 years set by Janus Robberts on 2 June 2001.

“I am ambitious. I want to improve and focus on the big throw in this big competition. For national record I’ll be happy with a 21.80m throw and then maybe something special can happen for me this season. I love competition and therefore that’s I work hard on conditioning and so that I suffer many injuries. I am ready to make history.”

Athletics South Africa (ASA) is the national governing body for the sport of athletics (including Track and Field, Cross Country, Road Running and Race Walking) in South Africa, is a member of the  IAAF and  the Confederation of African Athletics.  The association was formed in 1995 and is based in Johannesburg.